Eligibility for the Draw

The draw held on September 29 issued Invitations to Apply (ITAs) to the provincially nominated candidates who had a Comprehensive Ranking System (CRS) score of at least 742 points.

While the CRS cut-off score can seem very high compared to other Express Entry draws, PNP candidates get 600 automatically upon getting the nomination.

Therefore, they just had to have a CRS score of 142 points before getting the nomination to be eligible for this draw.

In the previous PNP draw, Canada had invited 521 immigration candidates with a minimum CRS score of 732. The recent draw is larger and has a higher CRS score, suggesting that many more PNP candidates are currently in the Express Entry pool.

The IRCC has invited more immigration candidates for permanent residence through the Express Entry system this year than ever before since the federal system started in 2015 to replace the country’s old first-come-first-served approach.

So far in 2021, Canada has issued more than the 108,000 ITAs it expected in the Immigration Levels Plan, inviting 109,696 candidates, with three more months left in the year.

The country broke the record for the number of ITAS issued in one draw when it invited a whopping 27,322 Canadian Experience Class (CEC) candidates with a record low CRS cut-off score of 75 on February 13.

Here is a chart comparing the number of ITAs issued this year to the last year at the same point in time: 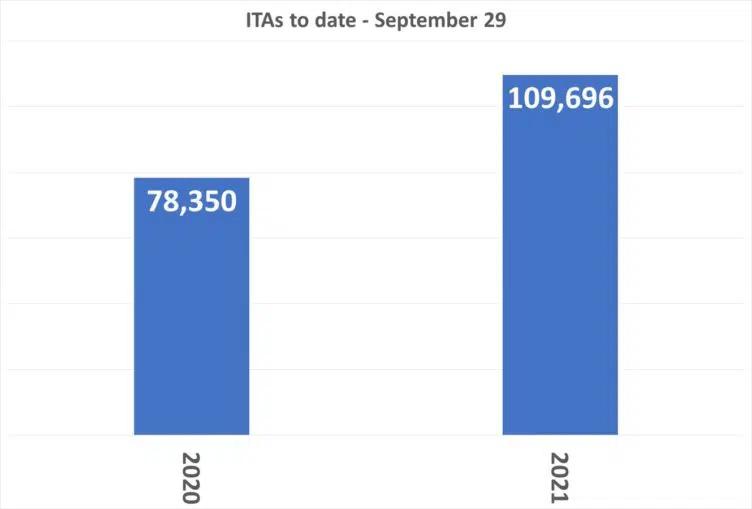